This, this old woman’s skin –
it fits me better than my own.

I can twist lavender through this brittle hair,
kiss soft feathers with these withered lips.
Eyes dart away when they see me –
free, free, free. I only tend the geese,

Whoever she once was, I know
she lived better than I. Her hands are rough.
My hands, underneath her hands –
I wear her hands like gloves, mine

When I was given the skin,
it was wrinkled like a map tossed aside.
It slipped over me easily –
a rippling silk dress, a salt wave crash,

Laughing, spinning my tears into pearls,
I fall asleep to the calls of the geese.
Inside the old woman I curl –
a smooth seed inside a dying fruit,

It doesn’t take a curse
a missed invitation
a witch or bad fairy
you just need something sharp
something pointed
to let yourself out.
The trick is in the pricking
of a finger, or a thumb
with intent to move
to be different
to change.
The princess understood this
standing in front of the spinning wheel
examining the spindle
considering her options
and when her animus shifted
from soft skin to hard wood
she found new freedom
spun her wheel
clomped carefully down the tower steps
and out into the world
to spin new stories.
So when the girl stands
in the shadow of the cactus
vibrant with life
it seems an easy choice –
a moment of pain
a bit of blood
and then she is filled with water
drinking the sunny air
home to chirping little birds.
So moved
she walks slowly over sandy stones
roots trailing earth
(a passing regret, quickly forgotten:
succulents have no need of boots)
arms up to the sky
jubilant
into the desert
on a new journey.

It’s always tough. My first
two lovers, a man and then

a woman, notice. No room
on penetration, no harbor

from storm. Grin and bear it
is what I learn: to bleed

I devour. Riddle thrust
in me. Hard rain.

My third lover
arrives. You look

a little different down
there, he says. Imagine

me falling, imagine me near

the whirlpool’s edge. Inside, too,
I answer. Inside, monstrous. Can

you hear it? Siren-song
follows. I cave in.

is enough. I choose to
go under the knife. Skin

in excess, shorn down; canal

want to look into it.

Back under. All spoils
but wayward gonads
plundered. Cervix
untethered, that
ungainly hatch.

Cyst-filled tubes
clipped to the quick.

never have borne it.

Undertow, lead
me through ether

He’d never
have stayed
to tread in
your wake.

I swim free of it.

A confession: I didn’t think I wanted to do a themed issue. This being my first time editing poetry, I thought a good goal would be to pick the three poems I love best. But when you’re face to face with a submissions pool nearly 500 poems strong, that’s easier said than done. Dear poets who submitted: thank you all so much. Dozens of poems struck a chord with me, poems I hope will find a home elsewhere so that many more people will get to read them. I was elated to find that a couple of poems I had shortlisted were chosen by some of my fellow editors of this first Volume of Remixt (and that I shared a choice with one of them—Cislyn Smith’s poem being one of the few that several of us chose, and on whose title I riffed when naming my issue). All of this speaks to what is at the heart of Remixt: many of us saw great poetry in some of the same poems, but when it came to making our choices, there was very little overlap. You will hear people tell you again and again that all editors are different, and after a peak behind the curtain, I can confirm it’s all true. We all have different tastes. We all sent some of our rejections with extremely heavy hearts. We’re all incredibly grateful that you let us read your work.

After my first read-through, I had a long list of about thirty poems. Those thirty, in my humble opinion, would have made a lovely poetry collection. I whittled it down to a short list of eight. I hold all of those eight poems dear in my heart. But once I had those eight, I was surprised to find three poems pulling together like magnets, and there is was, my themed issue. All poetry is to some extend about transformation; what I love about these three is that they are about changes, about alterations and reshapings, in a very literal, physical way. But there’s something more that draws them together: they make a perfect set not only because they each center on the idea of change—be it a hard-earned (external and internal) change into a lighter, freer version of oneself, a folding yourself into something that is not yours but that lets you inhabit it for a while (to ripen, gestate?), or the choice to subvert the narrative written for you to become something utterly foreign and finding nothing but exhilaration in that breakage of constraint—but because in each poem, the narrator emerges on the flip side better off, triumphant. Each narrator instrumental in her own ultimate transformation, even when initial catalyst is beyond their control, more necessity than choice. It’s these feelings of triumph and empowerment that pull me into these poems time and again. When I read them, I feel myself settle into their comfort like Brittany Warman’s gooseherd into her old woman’s skin.

I can’t close this editorial note without mentioning the strange and wonderful coincidence that one of the poets I’d chosen in this completely blind selection process is A.J. Odasso, senior poetry editor at Strange Horizons—the editor who sent me my very first poetry acceptance last year. “Sargasso Sea” was the first poem I placed firmly on my long list, and I’m thrilled that I got to send A.J. (as Julia Rios, our fearless leader in this Remixt project, pointed out) my very first poetry acceptance.

I hope these poems let you feel the comfort, triumph, and self-actualization with which they fill me. I hope you let them change you.

Brittany Warman is a PhD candidate in English and Folklore at The Ohio State University, where she is working on her dissertation regarding the intersection of supernatural folklore, particularly fairy tales and faerielore, and nineteenth-century Gothic literature. Her creative work has appeared or is forthcoming from Mythic Delirium, Apex Magazine, Stone Telling, recompose, Cabinet des Fees, and others. She can be found online at http://www.brittanywarman.com.

Cislyn Smith likes playing pretend, playing games, and playing with words. She calls Madison, WI her home. She enjoys the company of three cats, some humans, a few frogs, and an assortment of cool bacteria. She has been known to crochet tentacles, write stories and poems at odd hours, and gallivant. She is occasionally dismayed by the lack of secret passages in her house. She has been published in The Best of Electric Velocipede, Cthulhu Haiku 2, Star*Line, and Flash Fiction Online. 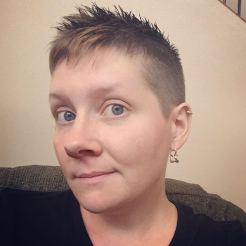 A.J.’s poetry has appeared in a number of strange and wonderful publications, including Sybil’s Garage, Mythic Delirium, Jabberwocky, Cabinet des Fées, Midnight Echo, Not One of Us, Dreams & Nightmares, Goblin Fruit, Strange Horizons, Stone Telling, Farrago’s Wainscot, Through the Gate, Liminality, inkscrawl, B attersea Review, and SWAMP Writing (just to name a few).  Her début collection, Lost Books (Flipped Eye Publishing, 2010), was nominated for the 2010 London New Poetry Award and for the 2011 Forward Prize, and was also a finalist for the 2011 People’s Book Prize.  Her second collection with Flipped Eye, The Dishonesty of Dreams, was released in 2014.  She holds degrees from Wellesley College and the University of York, as well as an M.F.A. in Creative Writing from Boston University.  She serves as Senior Poetry Editor at Strange Horizons magazine.

About the editor: Layla Al-Bedawi is a poet, writer, translator, and bookbinder (among other things). English is her third language, but she’s been dreaming in it for years. Her work is published or forthcoming in Strange Horizons, Fantastic Stories of the Imagination, Liminal Stories, Bayou Magazine, and elsewhere. Originally from Germany, she currently lives in Houston, TX. Find her on Twitter under @frauleinlayla or at laylaalbedawi.com.